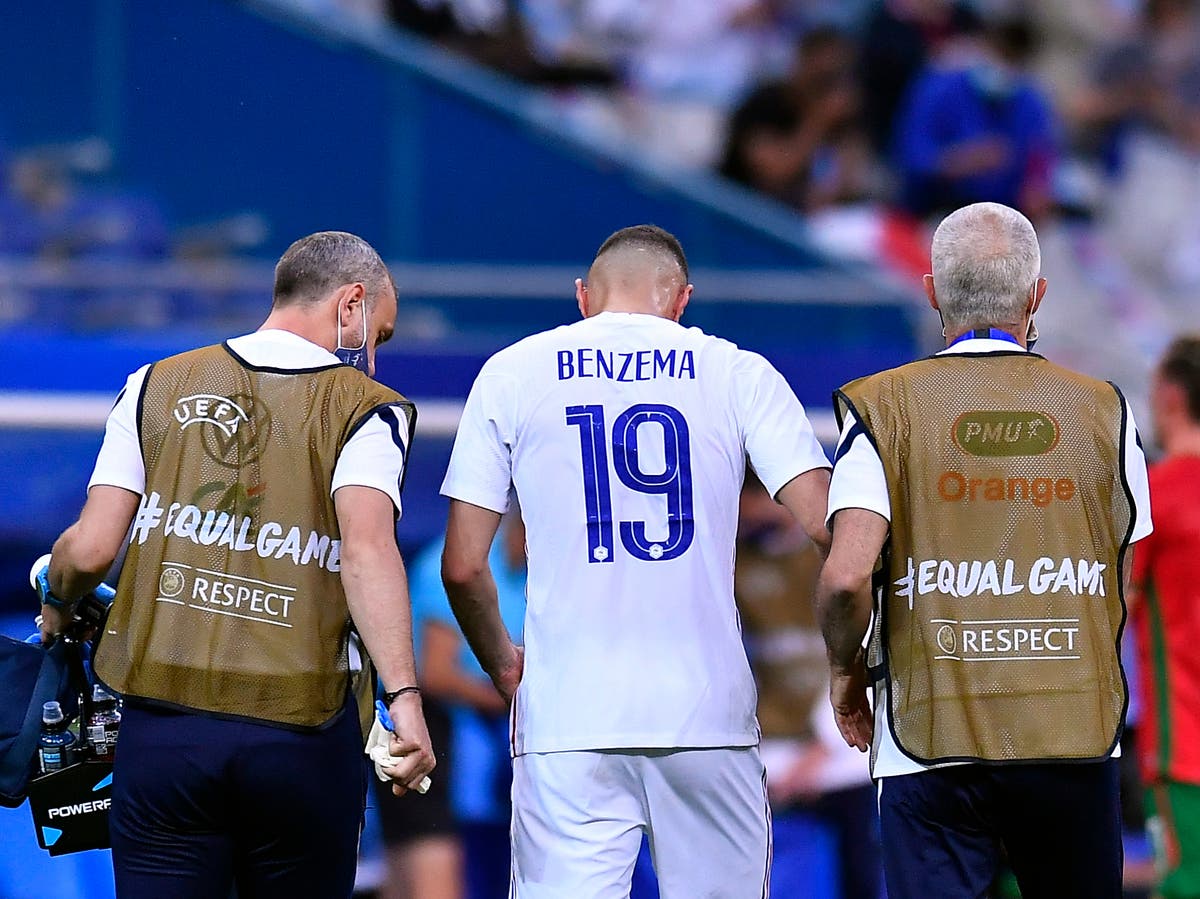 The big kick-off for Euro 2020 is now just two days away with England and Gareth Southgate finalising their preparation for their first group stage game.

While Scotland and Wales, too, look to thrive on the big stage following the tournament’s opener between Italy and Turkey at the Stadio Olimpico.

It has been a week of disruption for the Three Lions with Ben White stepping in late for the injured Trent Alexander-Arnold with the Brighton defender providing cover for Harry Maguire, who is contending with an injury just days out from the start of the tournament.

Croatia are up first, but Group D opponents Scotland will face Czech Republic off in the other first round of games on Monday.

Wales will be the first of the home nations to play in Euro 2020 when they kick off against Switzerland on Saturday.

There are now a series of late injuries for a number of contenders to cope with, including the Netherlands, who have lost Donny van de Beek.

Karim Benzema suffered a scare for the favourites and world champions France, limping off against Bulgaria. While there are Covid-19 cases, including Spain’s Sergio Busquets.

England midfielder Jordan Henderson said fans who booed players for taking a knee before matches proved racism is still an issue and that the team will continue to take a stand during the European Championship.

There were jeers from a small section of spectators at the Riverside Stadium in Middlesbrough when players took the knee before England’s friendly wins over Austria and Romania last weekend.

“It shows that if there are still people booing because we’re standing together against racism, then there still is a problem and we’ve still got to fight it and stand together,” Henderson said before Sunday’s opener against Croatia.

“It shows even more that we have to keep going, keep fighting it. From our side, it’s about being together and doing what we think is right.”

In an open letter to fans on Wednesday, coach Gareth Southgate said his team will not “just stick to football” during the Euros and that it was his responsibility to put debates such as racial awareness in the spotlight.

England, semi-finalists at the 2018 World Cup, face Scotland on June 18 and the Czech Republic four days later after playing Croatia, with all games being held at Wembley.

A similar incident took place in Hungary before Tuesday’s 0-0 draw with Ireland.

Ireland coach Stephen Kenny condemned the “incomprehensible” behaviour of Hungary fans who booed his players for taking a knee before the game in Budapest.

While Ireland players took a knee, the Hungary team stood and pointed to their sleeves, which had European soccer governing body UEFA’s ‘respect’ badge.

“The fact it was booed is incomprehensible really and it must be damaging for Hungary, with the Euros in Hungary,” said Kenny.

“It’s disappointing and it doesn’t reflect well on Hungary really, on Hungarian support.”

Latest from Spain, where they are being understandably cautious about the possibility of coronavirus spreading throughout the camp after captain Sergio Busquets tested positive last week.

Our latest squad guide is the Czech Republic, who find themselves in with England and Scotland in Group D. The Czechs will look to take inspiration from Slavia Prague’s run to the quarter-finals of the Europa League.

Slavia defeated British opposition in Leicester and Rangers to reach the last-eight this season, where they were beaten by Arsenal, and the core of the Czech’s defensive unit is made up of those who represent the domestic champions – plus two of the Premier League’s most consistent performers from last term.

Tomas Soucek and Vladimir Coufal played key roles in West Ham’s best-ever Premier League campaign, with the arrival of the pair from Slavia central to the side’s improvement under David Moyes.

When is the Euro 2020 opening ceremony? Well it all kicks off shortly before the first match on Friday – so close now – between Italy and Turkey.

Sign up to The Independent’s exclusive free virtual event tonight

Euro 2020 is finally here with the eyes of the football world set to be firmly fixed on Europe and one of the highlights of the sporting calendar.

The showpiece European competition was postponed a year ago with the coronavirus pandemic forcing everything to be rescheduled, but the show must go on with 11 countries now set to host a feast of international football all over the continent this summer.

The tournament is set to have plenty of home nation interest, of course. Gareth Southgate’s England will meet Croatia, Czech Republic and their oldest rivals Scotland in their group, following Steve Clarke’s side’s incredible penalty shoot-out win over Serbia while Wales will take on Switzerland and Turkey in Baku before heading to Rome to take on Group A favourites Italy.

Will Southgate’s Three Lions finally bring football home? Can Scotland spring a surprise? How will Wales cope without Ryan Giggs?

Join us for our free virtual event – Euro 2020 – will football finally come home? – on 9 June at 6.30pm where all those questions and more will be answered by our expert panel.

Gareth Southgate believes his England squad can have an impact on society and says they should never “just stick to football”.

The Three Lions were booed by supporters when they took a knee at kick-off at the Riverside Stadium in their two Euro 2020 warm-up matches, with Southgate describing the jeers as a “criticism” of the squad’s black players and implored supporters to get behind the display of solidarity. Boris Johnson’s spokesperson said the prime minister supported the players’ right to protest on Monday but also stopped short of criticising those who had booed.

Marcus Rashford, Raheem Sterling, Jordan Henderson and several other senior members of the England squad have been driving forces behind positive societal changes during the pandemic and, in a letter for The Players’ Tribune, Southgate reiterated that their influence has a power far beyond sport itself.

Netherlands and PSV Eindhoven right-back Denzel Dumfries has described the injury to Donny Van de Beek as a “huge blow” with the Manchester United midfielder’s nightmare season capped after being removed for the squad for the tournament.

Dumfries said: “This is a huge blow. As a group we are working towards the tournament and Donny is part of our group. We all really feel for him.”

While the Dutch Football Association said in a statement: “Donny van de Beek is not available to play the European Championship with the Netherlands. The Manchester United midfielder is struggling with an injury. As a result, the 19-time international, who last played for the Dutch squad in March, is not fit enough to join for the tournament.”

Marcos Llorente has tested positive for Covid-19, following Sergio Busquets’ case, which led to Spain sending their Spain Under-21 side to play Lithuania in a pre-Euro 2020 warm-up friendly.

RFEF president Luis Rubiales has suggested there will be more positive tests too:

“We have one positive case, there could well be more positive cases, it’s probable there will be. But these players here deserve respect, as does the badge on their shirt.”

Karim Benzema picked up a knock with France braced for the worst after the Real Madrid striker limped off against Bulgaria.

Didier Deschamps confirmed it was just a “knock on the knee”.

‘It’s a knock on the knee, which also affects the muscle,’ Deschamps told TF1. ‘He felt he was getting stiff so he asked to be subbed. The medical staff are taking care of him.’

Phil Foden has admitted he made a “massive mistake” by breaching the England camp’s Covid-19 protocols in Iceland last year but thanked Gareth Southgate for the chance to rebuild his international career.

The Manchester City youngster’s first call-up to the senior squad last September ended in him and Mason Greenwood being sent home early as punishment for meeting up with two women at the team hotel in Reykjavik.

Both players were overlooked for the subsequent October internationals but Foden returned the following month and has emerged as a key member of Southgate’s set-up in the time since, scoring twice in his six international appearances to date.

Man Utd fans and players have spoken on Solskjaer, now it’s up to Woodward