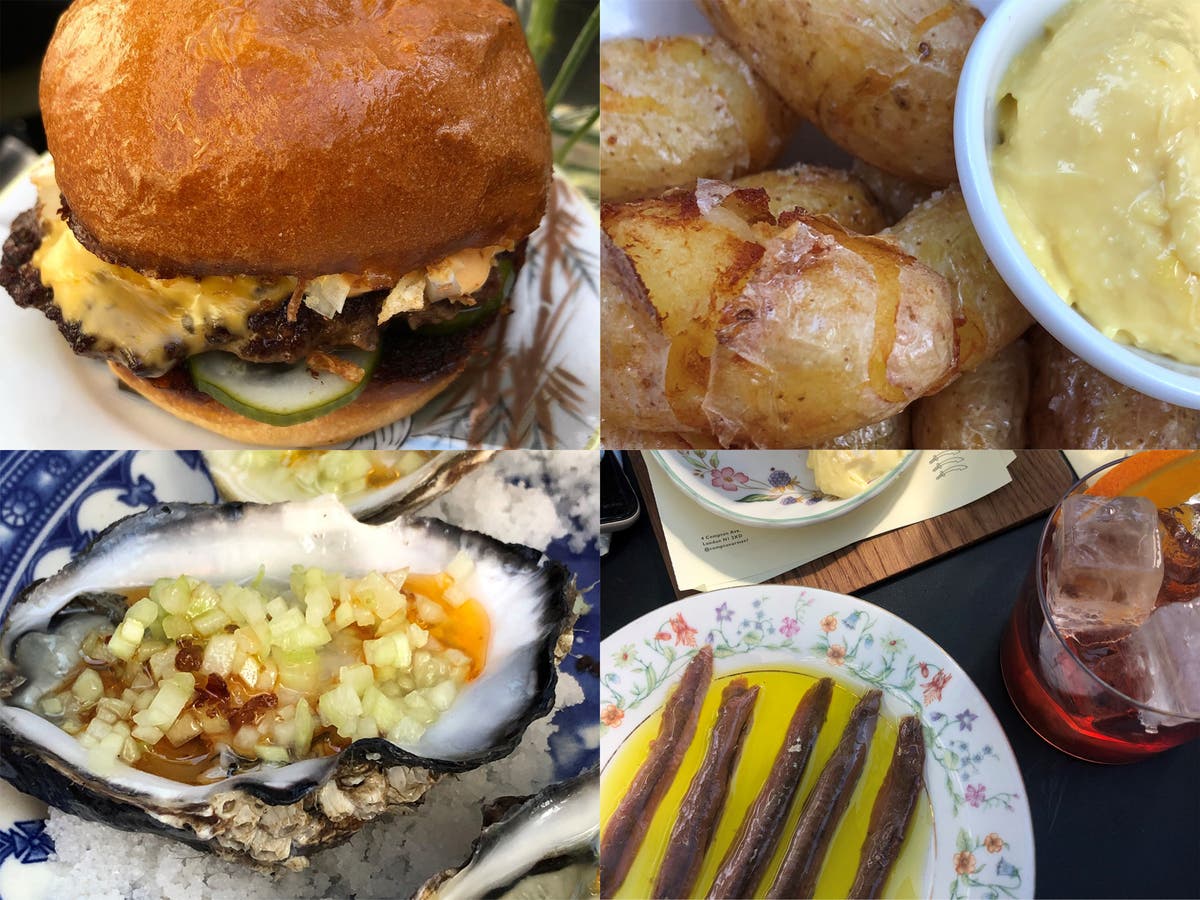 hat’s in a restaurant review really? One could scrutinise the food, turn up one’s nose at a wine list, or laboriously pick apart the service. But a good meal – one that sticks in your mind, to recall when you need a glimmer of hope or a dose of happy memories – is so much more than what’s on the plate and who delivers it to you.

It’s about the atmosphere, that intangible something that gives a space a warm, honey-dappled feeling. It’s about the weather – surprising late-April sun heating a courtyard, or relentless rain making a low-lit booth seem all the more cosy. It is even about the people sitting next to you – did they momentarily absorb you into their world? Or perhaps their conversation provided juicy fodder for eavesdropping – little nibbles of stories overheard, ripe for the unpacking with your dining companion as soon as the door closes behind them.

Much like how mise en scene encapsulates the feeling of a film, there is so much more to a restaurant than the food, and the right setting can make the difference between a good meal and a great one. For many during the pandemic, it is this nebulous factor that has been so sorely missed. Anyone can make a Michelin-starred meal out of a box filled with delicately packaged pouches – but the dining room table simply doesn’t match up.

It was with this in mind that I slipped into my seat at Four Legs, the kitchen residency at bolthole pub The Compton Arms in Islington, and my first formal restaurant booking since the industry began to spring back to life (like any good wannabe Brit, the temptation of the pub garden had proven too strong in the preceding weeks). And oh boy, did it deliver.

The meal began as I would happily begin every lunch – with sourdough layered with too much butter alongside plump Cantabrian anchovies in what I can only describe as the poster child for the power of humble food. That is not to detract from chefs Ed McIlroy and Jamie Allan’s cooking skills, but rather to serve as a testament to their firm understanding of what diners want. Formerly of Bao and Hill & Szrok, this is a duo who cook as if each customer is a friend round for dinner, producing food that is highly impressive yet appears deceivingly effortless.

You get the feeling cooking is not an endeavour taken too seriously by McIlroy and Allan, and this makes itself known in every aspect of the experience. The city’s best cheeseburger finds itself on the menu alongside delicately sliced scallop crudo, and expertly fried morsels of hake are set atop a tartare sauce that would convert even the most steadfast of chip shop loyalists. Speaking of chip shops, there’s another national sauce favourite given the Four Legs twist here – curry sauce. So good you could eat it straight out of a bowl with a spoon, but even better paired with juicy mouthfuls of pork, scoffed up in minutes with the plate wiped clean.

The menu is ever-changing, but there are a few favourites that remain. Notably, the aforementioned Dexter cheeseburger (named after the beef and its Yorkshire origins) with its crisp patty, American cheese and tangy pickles swaddled inside a buttery brioche bun, alongside the fried potatoes and aioli which, honestly, are worth a return visit all on their own. The mussels were the only thing that missed the spot, being a little overcooked, with the broth failing to have absorbed any of their umami-laden sea salt. But when the rest of it is as good as this, you can more than forgive one underwhelming dish.

The rotating selection of dishes draw on a multitude of influences, meaning Asian-accented flavours sit aside hyper-seasonal English ingredients – rhubarb and asparagus were notable additions during our springtime visit. A focus on seafood and meat – the latter a testament to Allan’s time at Hill & Szrok, a cult-favourite Broadway Market butchers and chef’s-table-style restaurant – anchors the menu, allowing the experience to feel unique yet familiar, no matter when in the year you visit.

The food is sort of like a metaphor for the clientele; archetypal traditional English pub-goers can be found discussing the evening’s football fixtures elbow-to-elbow with a pair of achingly cool Hackneyites who almost certainly live in a warehouse conversion. While the chefs may resemble the latter, you get the feeling they have a greater sense of kinship with the former.

Four Legs is a masterclass in unfussy food done right. There is no pomp or circumstance here – rather a particular sense of couldn’t-care-less that so many others try to emulate. But it’s not just the food that makes it so great: it’s the fact that this is the kind of place where you can start your meal sipping on a mezcal negroni, and finish it guzzling back a pint of lager with the guys you’ve befriended at the table next door. What McIlroy and Allan have managed to do is fuse London’s love of nostalgia-led food with the camaraderie of a beer garden – the finished product being some kind of gastronomical nirvana that feels like a true fever-dream after many months trapped in the four walls of your flat.