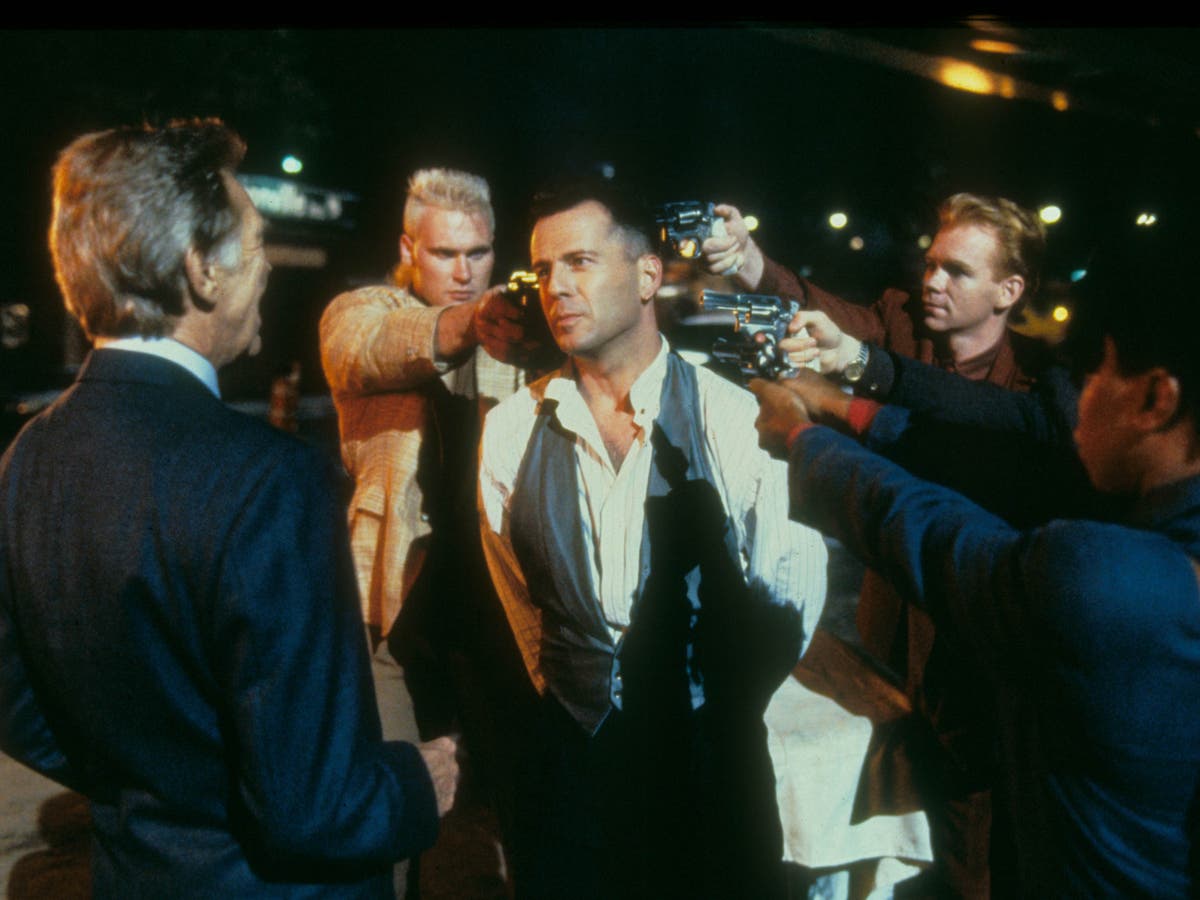 eath is sprinkled all over Bruce Willis’s recent CV. In the forthcoming Out of Death (release date to be confirmed), he plays a retired forest ranger saddling up to solve one last crime. He’s also due to shortly appear in A Day to Die, about “a parolee who kills a drug syndicate member”. In April, Deadline announced Willis had been cast in Killing Field, an action thriller about a man “whose life on his serene farm is interrupted when a cop and a pair of dangerous criminals show up”. Look out, too, for forthcoming capers Soul Assassin and American Siege.

Even the brightest stars dim eventually. Few, though, have faded quite as thoroughly as Willis. Today the 66-year-old is to be found cashing in on his Die Hard persona of indestructible tough guy in a never-ending parade of generic action outings. It’s easy to forget he once commanded $25 million per movie. Or that he was considered one of Hollywood’s most charming Renaissance men. An action star, sure. But a singer to boot– his 1987 soul-jazz record The Return of Bruno peaked at four in the UK charts – and a natural comedian.

What happened? The seeds of his decline were arguably sewn 30 years ago this month with the grand folly, Hudson Hawk. A pacy farce, the film tries to skate by on nothing but Willis’s megawatt charm. The big idea is that Bruce Willis, suavest luminary in Tinsel Town, is someone we’ll want to hang with for 100 minutes. He sings, he grins, he cracks wise. Who could resist?

Plenty of people, as it turned out. Hudson Hawk, which marks its three-decade anniversary on 24 May, nose-dived, grossing just $17 million in the US on a $70 million budget (it fared better overseas). He had, it is true, already endured a mega-flop, opposite Tom Hanks and Melanie Griffith in 1990’s The Bonfire of the Vanities, directed by Brian De Palma. That, though, had been an ensemble piece, from which he had wriggled free with reputation intact. Blame for Hudson Hawk would, by contrast, be rested squarely on Willis’s shoulders. The lesson for the star was that he should stick to the action template established in 1988 with Die Hard.

Which is what he did. Bundled into retirement was the super-smooth Willis of 1987 wrong-com Blind Date (opposite Kim Basinger) and of Moonlighting, the cult TV show in which he and Cybill Shepherd recreated the zinging chemistry of Spencer Tracy and Katharine Hepburn. From there, the spiral towards VoD obscurity and movies that all have “Kill” in their titles may have been inevitable. Hudson Hawk was the start of the longest slow puncture in Hollywood history.

There has been a campaign recently to redeem Hudson Hawk. The New Yorker last year ran a contrarian piece heralding it a “feast of visual imagination and whimsical style”. The critic Mark Kermode has championed it. But The New Yorker and Mark Kermode are deluded and you should not believe them. This screwball heist flick puts a foot wrong at almost every step.

They’re on the trail of a device rumoured to have been created by Leonardo da Vinci, which can turn lead to gold and which, for reasons never entirely teased out, will permit the Mayflowers to rule the world. In a bid to foil their plans, Hudson teams up with an undercover nun played by Andie MacDowell. One of the big set pieces involves Willis and MacDowell escaping an exploding castle in Italy in Leonardo’s prototype airplane. Earlier, Willis crosses the Brooklyn Bridge in an out-of-control hospital bed, yelling, “How am I driving? 1-800-I’m-gonna-f***in’-die!”

No good can come of a movie in which Bruce Willis plays a wise-cracking cat burglar swearing up a streak as he crosses Brooklyn Bridge on a hospital bed. And Hudson Hawk is, if anything, more painful than the synopsis suggests.

A manic smugness infuses every scene. This turns thermo-nuclear as Hawk and his pal Tommy “Five-Tone” Messina (Danny Aiello, an old buddy of Willis’s from his New York bartending days) burst into a Rat Pack-type duet during a robbery. Somewhere out there is a cinema-goer whose toes have yet to fully uncurl from the experience.

Vanity projects were a hot trend in Nineties cinema. Schwarzenegger clunkingly parodied himself in Last Action Hero. Kevin Costner’s The Postman was a post-apocalyptic monument to an ego about to soar into deep space. But none were nearly as disastrous as Hudson Hawk.

“Bruce took over the whole movie,” Steven E de Souza, the project’s nominal screenwriter, would tell Fandom.com. “Started re-writing it and directing it. The studio flew me over to Italy. I was there for five weeks. Every day I’d say, ‘Has he stopped re-writing?’ and they’d say ‘No.’ And there was no way I was going to pull the pencil out of his hand. But they had me there in case I could undo what he was undoing.”

Willis’s ego wasn’t the only thing ballooning out of control. So was the budget. With the shoot in Italy and Hungary dragging on for 106 days – the Italian crew were said to have insisted on downing tools at 5pm sharp each evening – producer Joel Silver may have wondered what he had taken on. Or perhaps he reminded himself of the success he’d had with Willis on Die Hard and its 1990 sequel and trusted the actor’s clout to carry the day at the box office. Whatever he felt, he never yelled “stop”.

Willis shrugged aside gossip about runaway costs. “These backstage things seem to be very interesting to people,” he said to The New York Times. “I’ve read five reviews of the budget of this film. What you have to understand is we’re not out there spending other people’s money hand over fist. We’re trying as hard as we can to make an entertaining film.”

One person who did try to curb the star was director Michael Lehmann. Hudson Hawk should have been his big Hollywood moment after the cult success of 1989 black comedy Heathers (which helped make a star of Winona Ryder). But as soon as he arrived on set, it became clear he was there to serve Willis’s vision rather than the other way around.

“I think everyone knew that Bruce was in charge,” an anonymous crew member told The New York Times. “There was no mistaking it. Michael might suggest a dolly shot, for instance, and Bruce would say, ‘That’s no good; let’s do this.’ And we’d have to make the adjustment and do it Bruce’s way. In the beginning, Michael fought it very heavily.”

Perhaps he knew that he was on a sinking ship without a life jacket. Grant and MacDowell realised it too. When he watched the finished cut, the Withnail and I star was appalled – and deeply worried. “I sat with Andie MacDowell and our agents when we were encouraged to go and see a screening of it before its premiere,” he told The Guardian. “Andie and I both looked at each other simultaneously and said, ‘We will never work again.’”

Grant was wrong about never working again. He was, though, absolutely correct in diagnosing Hudson Hawk as a disaster for everyone involved. That was confirmed as, with palpable glee, reviewers lined up to skewer it – and Willis’s jokey central performance.

“This unspeakably awful film can make an audience a little crazy,” said Rolling Stone. “You want to throw things, yell at the actors, beg them to stop.” Agreeing with that sentiment, The Washington Post concluded: “To say this megamillion Bruce Willis vehicle doesn’t fly is understatement in the extreme.” Later the Razzies would nominate it as one of the worst movies of the 1990s.

Willis appeared to take the backlash to heart. From that moment on, and with just one or two exceptions, he would stick to variations of Die Hard’s blood-soaked everyman, John McClane. Even in his best excursions – Pulp Fiction, The Fifth Element, The Sixth Sense – he’s a bruiser observing the world through hooded eyes. Weighed down, it is tempting to conclude, by the failure of Hudson Hawk.

Which leads us to late-period Willis – a fascinating study in artistic decline. As the sun has set on his A-lister status, Willis has leaned ever harder into what he knows best. Consider his recent run of films, with titles that sound like bad video games from the mid-1990s: Hard Kill, First Kill, Trauma Center, Reprisal, Marauders.

He is not busting a gut in any of these turns. Often, he limits himself to a cameo – playing, for instance, a sourpuss billionaire (Hard Kill), or a grizzled police lieutenant (Trauma Center). But even with a more substantial part – such as a grumpy astronaut in last year’s Breach – he wears a pained expression, like Butch Coolidge in Pulp Fiction after he’s told “his ass goes down” in the fifth round. Willis has been dying hard for the past 30 years.

And yet for all that, it’s clear he has a deep affection for Hudson Hawk and its slapstick tone. And whatever he feels about the aftermath, he obviously had a blast actually making the thing. Chewing up the scenery together, Willis and Aiello give off the vibes of two bros recreating a Bing Crosby-Bob Hope road movie from the 1940s.

The problem was that it was the 1990s and wisecracking alone could not sustain a $70 million action-comedy. Willis insisted Hudson Hawk was intended as a satire of the genre – that the absurdity was supposed to be part of the charm. The cosmic joke was that nobody saw the funny side. In that regard, he seems proud of the fact that, in the intervening years, the movie has attracted a modest cult following.

“Looking at how it kind of became this cult film, and what people come up and say to me on the street about it is, they dig the fact that it was making fun of itself, that it was satire,” he would say in the commentary for the DVD release of Hudson Hawk. “I don’t think anybody got that when it came out.”

It would be irresponsible to recommend anyone seek out Hudson Hawk. There are moments when it makes you want to claw out your eyes. And yet it has value as a time capsule from an era when Hollywood stars could strong-arm studios into lavishing millions on bizarre monuments to their egos. This was Bruce Willis at the height of his box office heft. From there it was a long way down. He’s arguably been free-falling ever since, picking up speed as he goes.

Daniel Radcliffe takes swipe at NFL star Tom Brady ahead of Super Bowl: &apos;Take that MAGA hat out of your locker&apos;