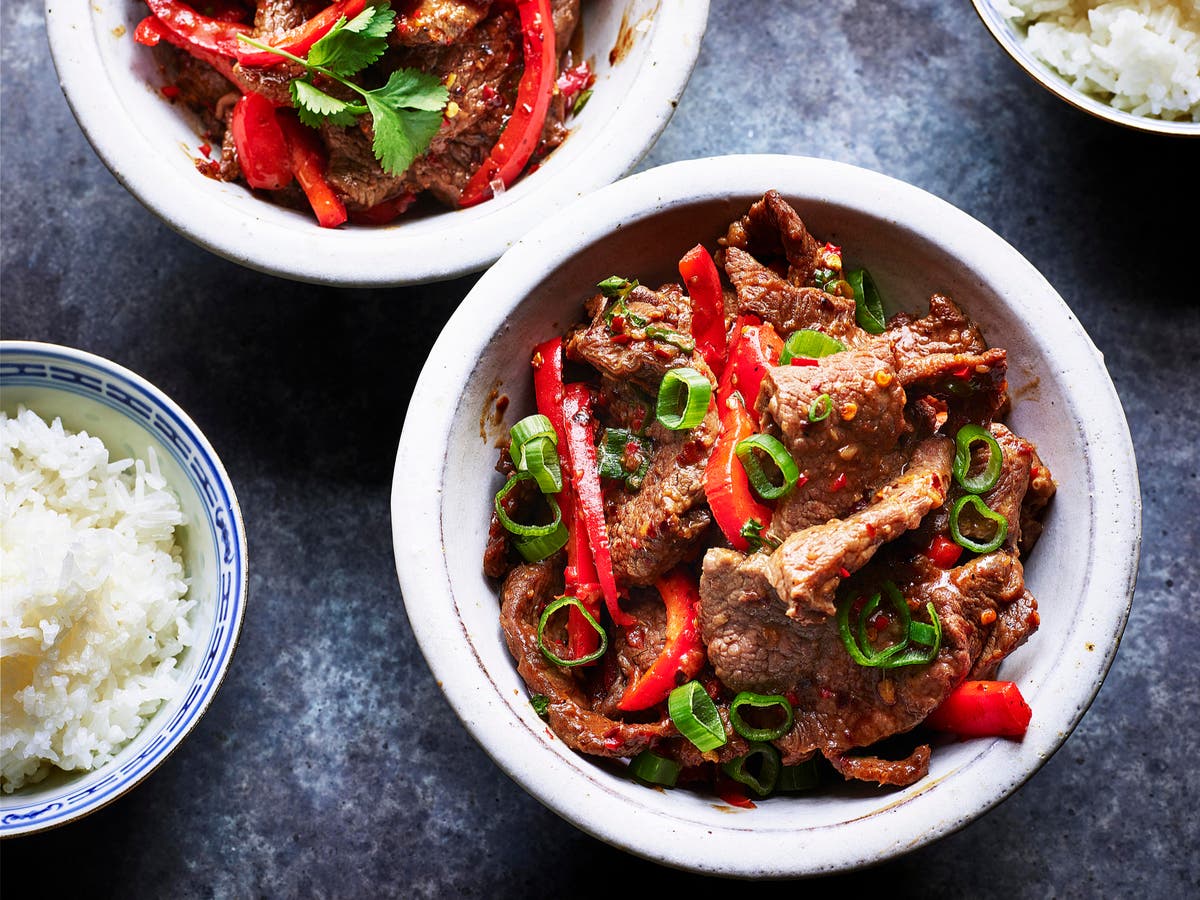 he trains that rattle directly above chef Elizabeth Haigh’s Singapore coffee shop clack-clack-clack down the phone line, while her neighbours appear to be drilling with total abandon. She shouts over the clamour nonplussed – all that noise means action, life returning, businesses reopening.

Not that her restaurant, Mei Mei, in Borough Market, central London, has been dormant. Opening just a few months before the pandemic completely shuttered bars and restaurants, Haigh quickly pivoted to takeaways, meal kits and feeding the vulnerable and local key workers.

Speaking a few days before outdoor dining resumed in England, she’s buzzed. “I cannot wait to share things on plates again; I’m sick to death of putting everything in packaging.”

Singapore-born Haigh, 33, trained as an architect before turning to food via a stint on MasterChef in 2011. She went on to win a Michelin star while at Pidgin in Hackney, east London. Now she’s written her first cook book, Makan, whose title means “dinnertime”, or “let’s eat”. Haigh calls the book “a love letter to my family and our Singaporean heritage”. It’s packed with the Singaporean dishes she grew up eating (“I would be baffled at beans on toast”), using seasonal ingredients found in Britain (her dad’s British; Sunday roasts were a weekly staple).

In the book, she writes: “When people move and mix together, food just gets better,” and she is adamant that’s true, “because food represents community. And without community, there’s no food, there’s no recipes, there’s no knowledge of culture and dishes”.

She says people’s interpretation of Singaporean food is often confined to Singapore noodles, which is nonsense. “One type of noodles in Singapore? It doesn’t exist,” Haigh scoffs. “[That is] a fusion of someone’s idea of Singapore.”

While high streets tend to be brilliantly spiked with restaurants celebrating Indian, Chinese, Thai, Indonesian and Vietnamese food, Singaporean restaurants often just aren’t in the mix. “There are many great ones but just not enough,” says Haigh and it’s that representation that’s been missing.

Partly it’s down to the exceptional culinary secret-keeping of Singaporean home cooks. “Makan represents the culture of my mum,” explains Haigh. “She cooks a lot, like a lot of her generation but they don’t really pass on that knowledge because it’s just their way of showing love, that they do all the cooking.”

Haigh had to doggedly prise the knowledge out of her mum but you’ll be glad she did. The recipes in the “Nonya Secrets” chapter, featuring her spiced chicken noodle soup, Gado Gado peanut salad, Malay hot and sour noodles, in particular, are ones, “she would go probably to her grave with if she could; I had to beg her to share them with me”.

Telling her mum these very personal recipes were to be published in a book “took some convincing”, but Haigh had a strategy. “I promised a lot of cooking – and a dedication.” It was also important to her to be able to make these dishes for her three-year-old son, Riley, so he could share them with his friends. “That’s the way to get your mother, bribe her by using the grandson as leverage,” she says wryly. “I just wanted it to be normalised, so it’s a cuisine everyone recognises more and that he can be proud of.”

Representation is crucial in a climate in which Asian hate crimes are surfacing during the pandemic and attacks on individuals and businesses are escalating. Haigh says: “I’ve had [racism] all my life, right?

“I’m glad that everyone’s got more of a voice to stand up against it now, because it’s just not tolerable. If you normalise this style of cuisine and this food and people know more about Singaporean culture it [becomes] normal. It’s just representation; it really does matter.”

Unravelling and then recreating her mother’s recipes was a challenge in itself though; Haigh had to translate her mum’s ingredient “guestimation” and dismantle some of the internal scaffolding of her own classical French training, “building it back up again, as per how my mum wanted it to be”.

She hadn’t previously needed those recipes sequestered in her brain. “In my generation, not lots of Singaporeans cook,” Haigh explains. “In Singapore, we’re absolutely spoilt for choice by hawker food. It’s more common to go eat somewhere because it’s so cheap.”

The homesickness involved in not being able to travel or access that delicious, clamorous street food world, was another motivation for Makan, “to recreate those dishes and recreate those memories”.

The moment dictates the meal: “For Singaporeans, that’s how we choose what we eat and when.” So if you need something hearty, it’d be her Hainanese chicken rice (“the recipe I’ve built my business on”) or a rendang. If under the weather, she’d turn to noodle soups and for celebrations, it’d have to be Singapore chilli crab.

Whatever the mood though, eating is paramount. Instead of saying “Hello,” as a greeting, Singaporeans are likely to say, “Are you hungry?” or, “Shall we get some food?”

Haigh says with a laugh that if whoever you’re with isn’t planning on eating, then, “it’s basically, ‘Oh, are you gonna watch me eat?’.”

It’s that delight – in eating, cooking and trying food – that Haigh hopes to bestow. “I’m a feeder, just like my mum,” she says. “I wanted to write Makan so much because I wanted to share that joy.” And you can’t not feel it in every recipe.

This is a simple yet delicious soup. You can add a bit more Chinese choi sum and make it a side dish, or add noodles and serve it as a meal on its own.

A good pinch of white pepper

½ teaspoons cornflour, plus extra for dusting

1. Start by making the wonton filling. Put all the ingredients, except the prawns, in a bowl and mix together by hand for five minutes. You want to make sure that the pork and seasonings are thoroughly combined. Mix in the chopped prawns until evenly incorporated.

2. To make each wonton, take a wonton skin and put about one teaspoon of filling in the middle. Wet the edges of the skin with water, then bring the two opposite corners together to form a triangle, trying to remove as much air from the wonton as possible (to prevent it from bursting open later on). Press the edges together to seal. Dust the bottom of the wonton with a tiny bit of cornflour to prevent them from sticking together.

3. Continue making wontons like this – you should be able to make about three dozen, depending on how generous you are with the filling.

4. Bring the salted water to the boil in a saucepan, then turn the heat down to medium. Add the wontons one at a time to the water. Don’t rush and don’t crowd the pan, cook in batches if you need to. Once a wonton is cooked, it will float to the surface, around four to five minutes. Scoop out the cooked wonton and place in cold water for 10 seconds. Lift out and set aside. Continue until all your wontons are cooked.

5. To complete the soup, bring the chicken stock to the boil in a large pot, then turn the heat down to medium. Season with salt, pepper and soy sauce to taste. Add the choi sum or lettuce, then add the cooked wontons, dropping them gently into the soup. Take care not to stir hard as you don’t want to break the delicate wontons. Ladle into bowls. Alternatively, I find it easier to put the wontons into bowls and ladle the stock into the bowls. Garnish each with chopped spring onions and a drop of sesame oil.

The traditional Nonya recipe for this dish calls for kangkong or water spinach. As here in England we do not usually have access to good-quality fresh Asian vegetables, I substitute French green beans.

Although I am fond of kangkong, I think this dish is actually better made with the beans because of their crunchy texture. It is also more affordable. If you want to make this vegetarian/vegan just omit the dried shrimps, belachan and pork floss.

1. Soak the dried shrimps and chillies in warm water for at least 10 minutes or up to one hour, then drain. If you don’t want the dish to be too spicy, remove the seeds from the chillies, then place them in a blender with the soaked shrimps, garlic and shallots. Blend together to make a rough paste.

2. Heat the oil in a wok over a medium heat. Add the chilli-shrimp paste and stir-fry until aromatic, then add the belachan and stir for a couple more minutes to cook the paste out.

3. Turn up the heat slightly, add the green beans and give it all a good stir. Stir-fry for a couple of minutes. Add the water to help ‘steam-cook’ the beans and season with salt, then turn the heat down and continue cooking for four to five minutes or until the beans are tender (no more than seven minutes in total).

4. Serve immediately with pork floss sprinkled on top, if using.

This quick and delicious beef stir-fry is a staple dish for us at dinnertime at home. You can omit the chilli and dried chilli flakes if you’re cooking for little ones, which is what I do for my son, Riley. As with all stir-fries, have your ingredients measured and prepped ahead, because the cooking time is very short.

1 red pepper, cut into bite-sized pieces similar to the beef

1. Stir the marinade ingredients together in a bowl. Add the beef and mix in well with the marinade.

2. Add three tablespoons of the oil to a wok set over a high heat and swirl the oil around to coat the wok. When it is starting to smoke, add the beef and stir-fry briskly, separating the pieces using a Chinese spatula. When the pieces are separated and still a little pink, remove them from the wok and set aside.

3. Add the remaining oil to the wok, then add the ginger and garlic. Allow them to sizzle for a few seconds to release their fragrance. Tip in the red pepper and fresh chilli, if using, and stir-fry until hot.

4. Return the beef to the wok and give everything a good stir, then add the chilli flakes. When all is hot and fragrant, add the spring onions and remove from the heat. Stir in the sesame oil, check the seasoning and serve.

Variation: Stir-fried venison: Venison is a very healthy alternative to beef, as it is rich in iron, potassium and zinc and is very lean. Just replace the beef in the recipe above with 250g venison fillet, cut into strips, and add a splash of stock at the end to prevent the stir-fry from being too dry.

Wines of the week: 7 reds to blow away the January blues

Olivier Awards 2019: The Inheritance, Company and Come From Away lead nominations